Home > Vietnam > Things To Do > Textiles of Vietnam Series: The Black H’mong Batik

After the hemp is being woven into square pieces of cloth, the Hmong women will cut into smaller parts according to different purposes. But no matter what it is, they always put some decorations on them. To the ethnic people, making their own clothes is like a sacred ritual and decorating is a way to connect with another spiritual world. In this post, we’d like to introduce batik- the most artistic work, also what the Hmong people are most well-known for. There are several ways to create a pattern on the fabrics, but batik is probably our favorite one. Since we love the delicacy and tenderness of the drawing. In addition, meanwhile embroidery means putting more layers on the clothes, batik allows the fabric shine at its simplest.

Ms. Soi- our host and also our teacher said that the Hmong women will gather with friends, neighbors for this interesting work. They can sit around a stove, chitchat and have some homemade snack to make it more fun. Because it’s not good to breathe in the charcoal for hours, they always put a cup of water in the middle of the stove (as you can see in the picture, they use the empty coke can). It is believed to prevent any bad effects like dizziness.

At this point, all Hmong women and little girls become artists to transcend the vibrant nature into the skirts, dresses… To create the patterns and decorations on the fabric, the Black Hmong apply the technique of drawing with bees wax. First, they melt a mixture of bees wax and candle wax. It requires a special kind of pen for this work. A typical one has the wooden handle and metal nib for the wax to be able to drip on the fabric. A burning charcoal stove is needed to keep the wax boiled.

The key in this step is how to control the temperature of the wax. If it’s too hot, basically you can’t draw a line as it will come out from the nib too much. Otherwise when it’s not hot enough, the wax will be dried out even before it reaches the fabrics. If the temperature is good, the lines will come out evenly thick and the result can be very rewarding after being dyed.

As ancient Vietnamese people believe that the sky is round, the land is square, these two are used a lot as the base shapes to create the patterns. In this picture you can see each of us chose a square and a round one to challenge ourselves. We have to be honest that we’re nowhere near a painter, hence we chose to draw in accordance with samples. But when it comes to batik, you can draw whatever satisfies your imagination. For novices, it takes 2 hours for the ones we did. But for Hmong women, it takes much less.

Unlike most people believe the batik is the last step, the indigo dyeing is. However we’ll spare this fascinating process for another post. After the wax has dried in the form of many beautiful patterns, the fabric then being dipped in natural indigo vessels for more than 10 times to reach a perfect dark blue tone. The parts covered by wax will not be cracked through by color at this stage. Hence, the patterns nicely remained original color. The wax later will be removed easily by washing under the hot water.

Until now, the Black Hmong have developed about 20 different patterns from this technique which can be easily seen in their daily clothes. Those patterns make their styles to become both fashionable and exotic. Nowadays, these techniques are still being passed on to the younger generation everyday, from a mother to a daughter, like an endless circle.

Are you ready? Let’s have a look at our top 5 destinations for honeymoon in Vietnam. We all have different ways to define romance. It could be letting the night fall with a nice cocktail by the picturesque beaches or savoring a dish of tasty food which is gracefully decorated. However, it’s really not the ... Read more
read more

We all have heard of Halong Bay and constantly ticked it for our must-go destinations. What most people don’t know is that Halong Bay is not the only gorgeous one in the area. There are 3 of them. And they all shine in their own nuances and are unmistakable. Let’s take a closer look to ... Read more
read more 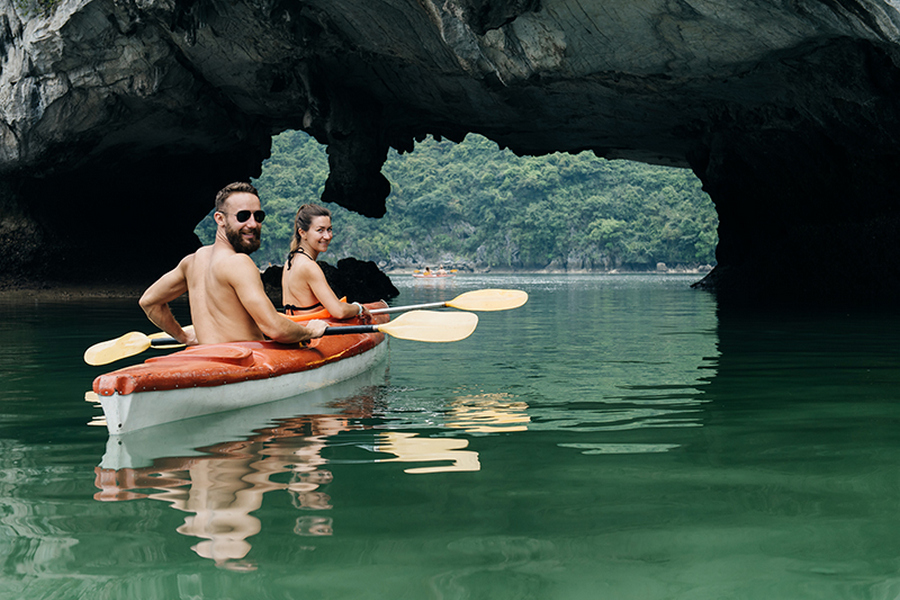 Enjoy a Halong Bay Cruise for Just Two of You

Travelling to the Far East is considered a luxury that should be enjoyed by those who appreciate history, culture and diversity. When you visit locations like Vietnam, Indochina and Cambodia then you need to go with a plan so that you can see as much as possible during your time there. This is best accomplished ... Read more
read more